With over 47 years’ experience, Golfpac provides custom golf packages, vacations, and discount travel specials to over 40 golf destinations. Here at www.golfpactravel.com you can research information and ratings on courses, hotels and resorts, find the best deals, and even quote and book your vacation all online. Whether you’re looking for a weekend getaway or a full-blown golf adventure, you can rely on the travel experts at Golfpac.

Valley of the Sun

It’s an embarrassment of sports riches, really. Can any other destination even come close to what the Phoenix/Scottsdale area has to offer on an annual basis? Take just the first three months of next year. College football’s national championship game was played at The University of Phoenix Stadium in nearby Glendale on January 11th. Three weeks later the PGA Tour made its annual raucous stop at the TPC Scottsdale for the Waste Management Phoenix Open. And did we mention the weather? For those three months and about four others, it is absolutely perfect for golf. And speaking of golf...there is plenty of that to choose from on all sides of the Valley of the Sun. 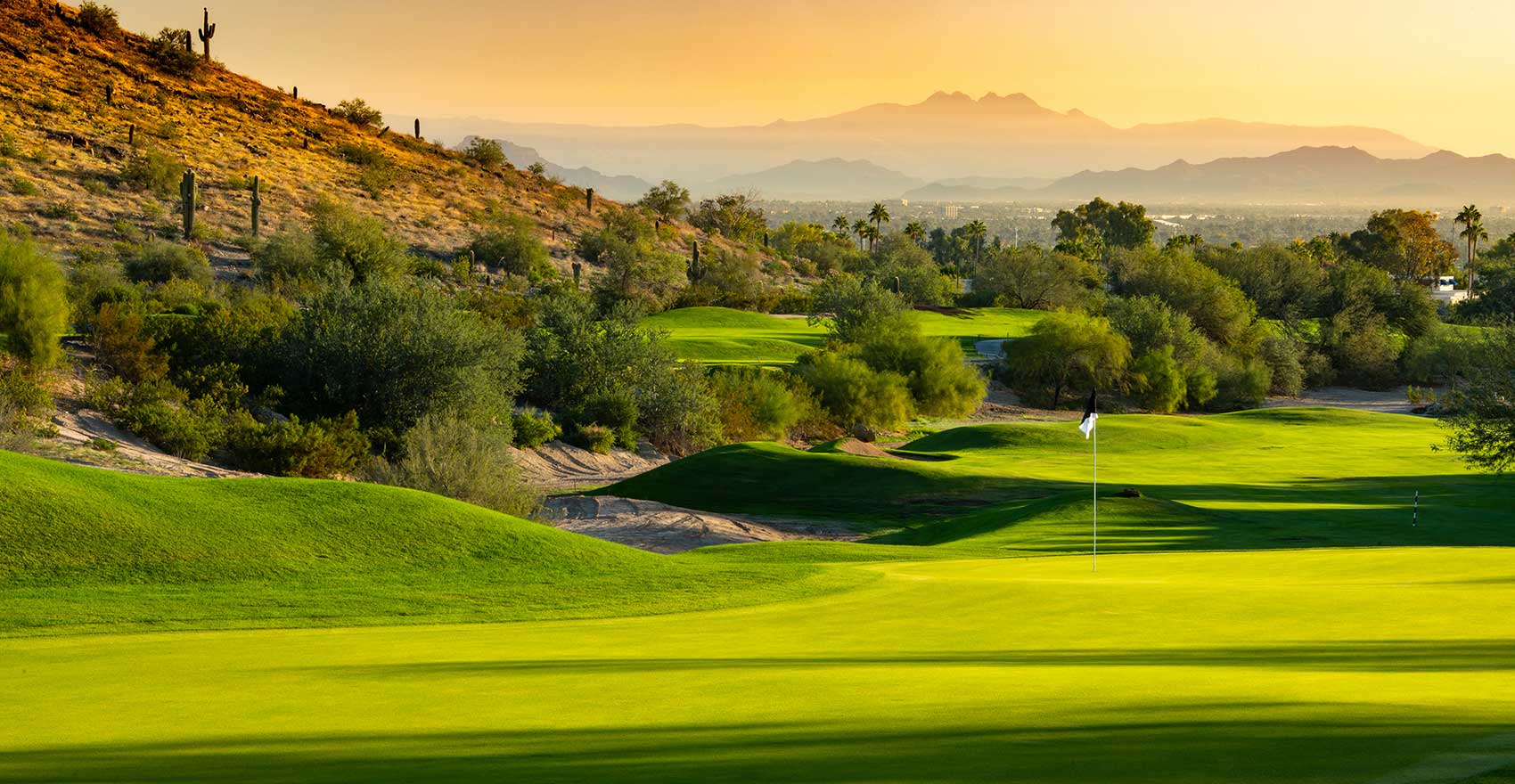 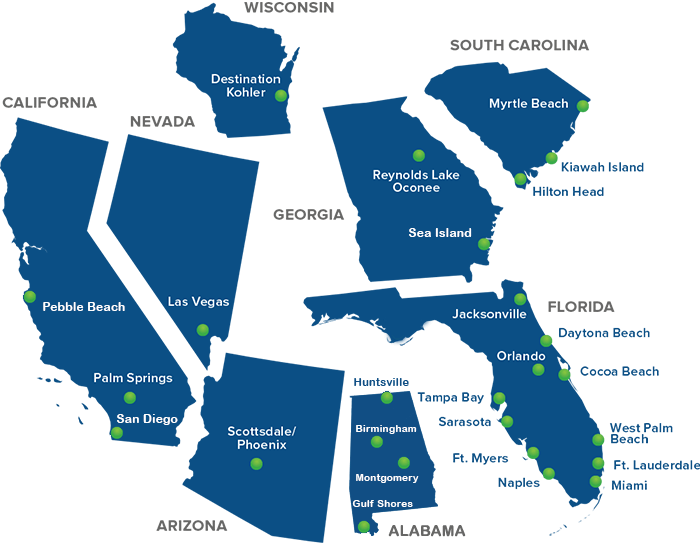 The Pete Dye-designed layout at ASU Karsten just 15 minutes east of Sky Harbor International Airport has long been home to the very successful Arizona State University Sun Devil golf teams. Eagle Mountain Golf Club in Fountain Hills, which turns 20 this year, remains one of the more enjoyable places to play in the Valley. You can thank designer Scott Miller for that. His work included contoured fairways that often funnel shots back toward the fairway, plus some elevated tees that provide memorable views of nearby Red Mountain. Don’t be surprised to see some Cubs hats around Longbow Golf Club in Mesa. It’s a short drive from this Ken Kavanaugh design to their new minor league stadium that debuted last year. And try not to get distracted by the small planes taking off from nearby Falcon Field Airport — the fast greens require all of your focus. The up and down topography in Fountain Hills is what sets the recently enhanced SunRidge Canyon apart from other courses in the area. That and the “Wicked Six” — the tough closing stretch of six holes which, except for two par-3s, play uphill in often windy conditions.The drama reaches a higher level at Gold Canyon, which has some of the most memorable landscape in the Valley. The Sidewinder course is a mere appetizer to the main entree known as the Dinosaur Course, which comes with a rollercoaster rider of elevation changes, notably on the downhill par-3 fifth. You get five other chances at hole-in-one immortality here. Over at We-Ko-Pa Resort & Conference Center in Fountain Hills, the Cholla and Saguaro courses are ranked second and third respectively on GOLF Magazine’s Best Public Courses in Arizona.

Phil Mickelson and some partners purchased McDowell Mountain Golf Club in north Scottsdale in 2011, making numerous improvements (such as wider fairways) that have been well received. A new 12,000-square-foot clubhouse was unveiled in 2013 and has become a favorite spot for both visitors and locals. You may have already played Verde River Golf & Social Club, but under a different name (the course that is, not you). This 2006 Ken Kavanaugh design in northeast Scottsdale was known as Vista Verde until last year and Tegavah for a short period. The 7,229-yard layout was built to play firm and fast, and it can get breezy here 11 miles east of North Scottsdale. A temporary clubhouse (try the chili cheese dog) was erected last year, but it’s the views of the Four Peaks, Tonto National Forest, and Mazatzal Mountains that you will remember the most.

Troon North celebrated its 25th anniversary in 2015, with the Pinnacle and Monument Courses still setting a high standard all these years later. The green fee is steep during peak season, but the customer service, course conditioning and stellar design (by Jay Morrish and Tom Weiskopf) keep both layouts in the must-play category. The TPC Scottsdale underwent a multi-million dollar renovation a couple of years ago overseen by original co-designer Tom Weiskopf. His work included new greens on four holes, the consolidation of a split fairway on the par-5 13th and church pews added to a fairway bunker on the 18th hole — plus other new tees, bunker sand, and grass to go along with a renovated clubhouse. One local resident loves the changes and the course. “I’ve always thought the TPC Scottsdale was one of the best, if not the best, golf courses in Scottsdale,” said Brandel Chamblee, Golf Channel analyst. “I don’t think they did anything in this redo to detract from that.” North Scottsdale offers a deep roster of places to stay, especially if you want a resort with golf right outside your room (or at least very nearby). Places like the JW Marriott Phoenix Desert Ridge, The Westin Kierland Resort & Spa, and Boulders Resort & Spa come complete with comfortable rooms, restaurant, and spas, and each have at least 27 holes.

Palm Valley’s location in Goodyear, some 20 miles west of downtown Phoenix, means you will get a glimpse of the University of Phoenix Stadium on your drive out there. The par-72 Palms course designed by Arthur Hills has a great closing par-5 with water up most of the left side and on three sides of the green. The par-62 Lakes Course by Hale Irwin offers a quicker but no less enjoyable round. Quintero Golf Club, located 30 minutes northwest of Scottsdale, takes you away from the city and out into the desert to a Rees Jones design that includes as good a foursome of par-3s as anywhere in the region.Two options to stay on this side of town are The Wigwam resort in Litchfield, which dates back to 1929 and has three 18-hole courses (including two designed by Robert Trent Jones Sr.); and the all-suite Pointe Hilton Tapatio Cliffs Resort in Phoenix, home to Lookout Mountain Golf Club.

Food options in the Valley are almost as plentiful as the golf courses. Top choices include Rustler’s Roost, Flemings, Kai Restaurant (at Sheraton Wild Horse Pass), and RA Sushi Bar. But for diehard golf nuts who just can’t get enough, you can also compete against buddies at two popular TopGolf locations (in Scottsdale and Gilbert), tour the PING factory (reservations required) or try the golf swing robot at Boccieri Golf. Two PGA Superstores, both in Scottsdale, have everything golf-related you forgot to pack for the trip. For some non-golf local flavor, Old Town Scottsdale has plenty of galleries and restaurants, while an interesting history lesson can be found at the brand new Museum of the West, which opened in Scottsdale in 2015.

Let our golf specialists create a custom quote for you.

Why Book with
Golfpac Travel?

Give the golfer in your life a Golfpac travel certificate good for their next golf vacation with us. They never expire, and can be purchased for any amount.